The History of the Salt Factory 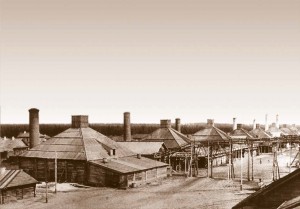 Solikamsk has always been famous as a “saltcellar” of Russia. In the 17th century the annual output of “salt-permyanka” was more than 7 million poods that made about 70% of all-Russian evaporated salt.
There were some salt-plants in the territory of Prikamye, but only one of them, the Ust-Borovskoy salt factory, founded by the merchant Alexander Vasilyevich Ryazantsev, has been well preserved up to now.

The land for building a factory was rented from a local community of peasants, and Ryazantsev, in addition to the rent, undertook to teach their children at school, provide people with workplaces at plant and pay for their medical care.

The factory was located in the territory rich in salt brines. Their concentration was twice as high as the Russian average.

The factory was built by a unified plan in rather short terms: its construction began in 1878, and in 1882 the first salt was boiled down. By the beginning of the 20th century, about 180 workers had been employed here and it was one of the biggest industrial enterprises of Prikamye.

In addition to the main facilities of the salt factory, the original complex included support services – a mechanical workshop, forges, stables, a power station,   houses … There were more than 50 buildings. 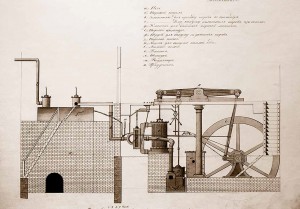 Salt solution was lifted from the well by steam engine.

Solution-mining pipes were made of wood. Evaporated salt was produced in “chrens” (rectangular trays made of riveted iron sheets). Salt workers manually collected, overloaded and stored it in barns situated on the banks of the Kama River.

Before the revolution of 1917 the factory belonged to some representatives of the Ryazantsev family who didn’t changed its image much, as well as technological process of salt production itself.

The biggest innovation was the transition from black salt-works to white ones in 1895.

The factory continued to work with high intensity. Together with six other salt factories of Prikamye it was united in trust “Permsalt and became its part.

In 1923-1924 some minor technical improvements were made: some horse-driven windlasses were replaced by electric, rod drives on separate wells by electric motors; air heat pumps in salt-works, an artificial draft in the furnaces were introduced. Practically nothing changed at the factory since it became a part of “Uralsalt Trust” in 1930.

The cost of evaporated salt increased, its production became more unprofitable, but the factory continued to work even after the Second World War. Since the beginning of the 50s, the Ust-Borovskoy factory was the only operating salt production enterprise in Prikamye, as the rest were closed due to the construction of the Kama hydroelectric power station.

Salt production remained almost at a pre-revolutionary level. No major changes had been placed in any manufacturing technology, any equipment and any major production facilities. 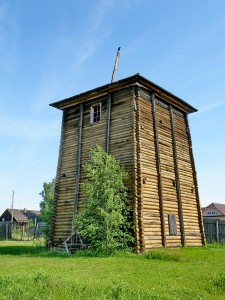 Borovskoy salt factory, called Solikamsk salt-works, became the part of the Ural plant as one of its workshops and later the part of Solikamsk Potash Mining Complex, a modern powerful enterprise, a leading potash fertilizer producer of the former USSR.

As the heads of the enterprise were not interested in modernizing unprofitable production, all the components of salt production were fully preserved, and remained virtually unchanged.

The final technical innovation – the transition from wood fuel to coal – was made in 1950s.
On January 1, 1972 the Ust-Borovskoy salt factory was closed. Nearly a century of history of a unique industrial enterprise came to an end. For many reasons the original technology of salt production, representing an industrial cycle of salt extraction since 19th-20th centuries, and a full range of production equipment in the late 19th were preserved in the way they had been operated.

The Ust-Borovskoy salt factory is the only best-preserved remainder of the huge system that supplied salt to all over Russia; it has no analogues neither in Russia nor in the neighboring countries.

Copyright 2016 Museum of the History of Salt